Hydroca is a manufacturer specialising in products in the field of garden and greenhouse technology for home users. So far, the company has attracted the attention of customers mainly through its sophisticated LEDs. 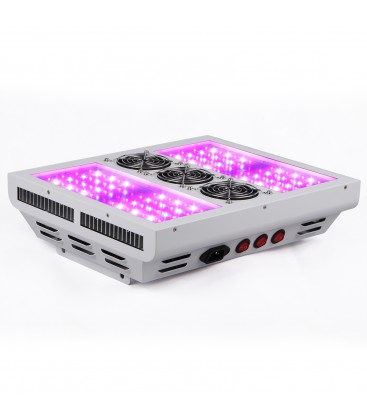 The first light sources developed by Hydroca were the lamps of Blue Line Series:

These were particularly interesting for beginners, as they offered excellent value for money. With an effective output of 140, 280 or 416 W (depending on the model) and a specified service life of 50,000 operating hours, the Blue Line Do not hide the series.

The installed OSRAM and CREE LEDs did the rest to provide up to 10 plants with sufficient light. For example, the Blue Line 280 at a distance of 50 cm a photon current density of approx.1020 µmol/m²/sec.

After further development of the product range, Hydroca finally decided to Blue Line LEDs no longer to be produced and replaced by a newer series. In the meantime, these can therefore only be found in most shops as part of sales. 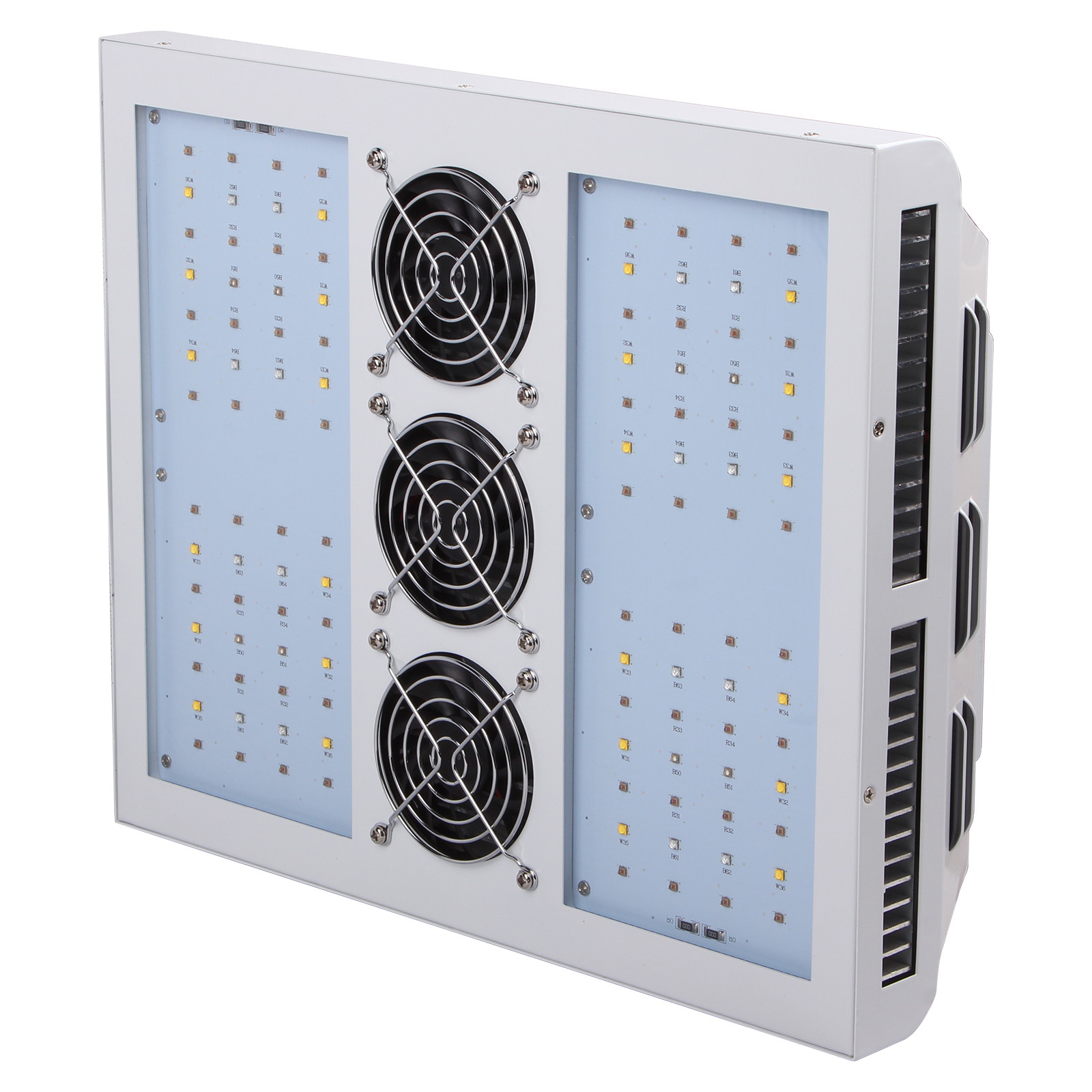 The further development of the Blue Line Series resulted in the Hydroca Hobby LEDs. Although it is of the same design as its predecessor, it has an optimized inner workings adapted to current requirements

The most striking innovation is certainly the changed colour spectrum of the Hobby Row. Like many other manufacturers, Hydroca has incorporated the knowledge that your plants will benefit from a fuller colour spectrum into the development of the new LEDs. As a result, the LEDs built into the light sources have been adapted so that the light emitted really does cover all the wavelengths required by the plants. This not only has the effect that your plant can perform more effective photosynthesis, the light also appears whitish and makes your work in the grow area more pleasant.

In addition, the effective output of the lamps has been optimized with modern technology. The measured photon current density exceeds that of their predecessor series noticeably and thus delivers a higher power density with the same space utilization. 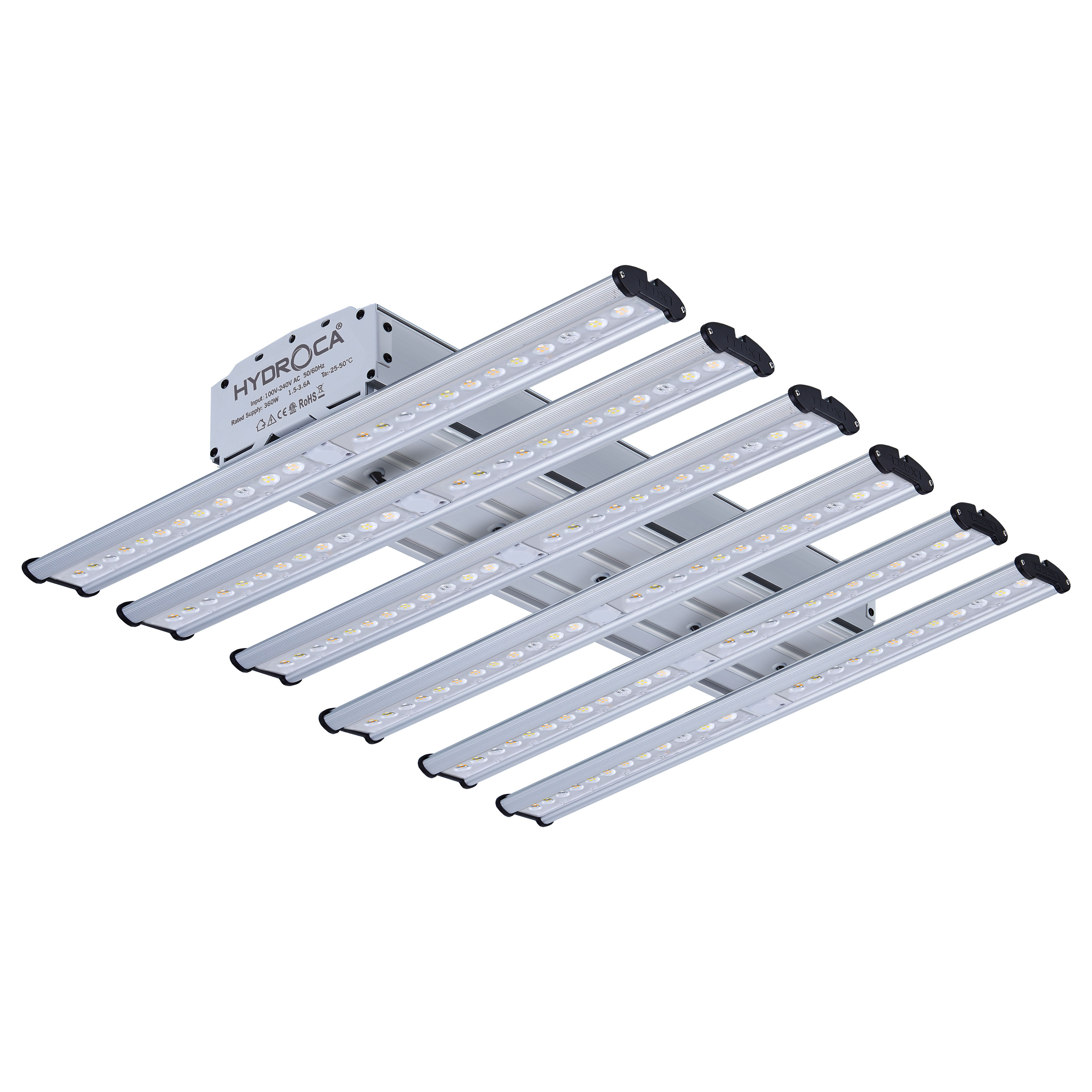 The Ambition LED range offers what its name suggests: a light source for advanced and Grower with ambitions

Just like the lamps of the Hobby Series, the Ambition LEDs correspond completely to the state of the art. However, the concept behind the professional version is different. The aim was to achieve an even better power density and a significantly higher illumination area, so that even larger grow areas can be optimally illuminated.

For this purpose Hydroca uses several LED arms connected in series. These actually provide an improved PPFD value and, together with the OSRAM chips installed in all Hydroca lamps, ensure excellent lighting conditions

However, the Ambition LEDs are passively cooled and thus save power where it makes sense, despite the impressive output of up to 800 W (depending on the model)

Hydroca has announced the release of its own Growbox announced. This is to combine the manufacturer's know-how accumulated over the years and become a real alternative on the market. As soon as we have it available we will inform you about it.

More information about Hydroca and its products can be found on the individual product pages, on www.hydroca.eu or on our YouTube channel! 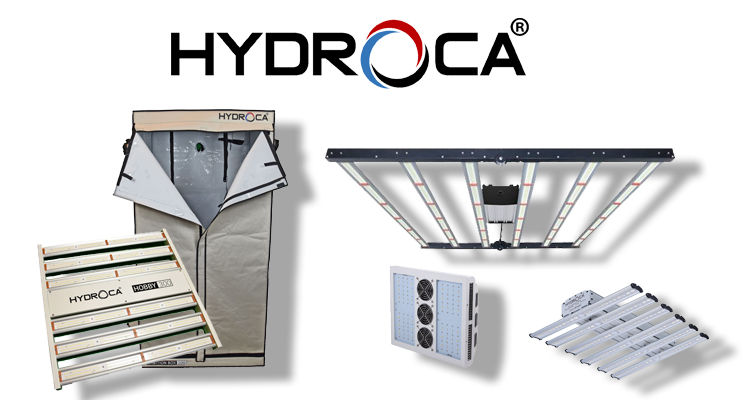 Over many product generations and under the aspect of constant innovation, Hydroca has one goal in mind: to provide you with efficient and affordable light sources.

LEDs from Hydroca are therefore particularly characterized their astonishingly high system efficiency, which ranges from a respectable 2.1 to an incredible 2.7 µmol/J. This means that you get at least 2.1 µmol photons of light output per watt of power used and depending on the lamp used.

The emitted light does not simply correspond to the PAR spectrum (which contains the light relevant for photosynthesis). High-quality Osram and Samsung LED chips have been put together to form a well thought-out light spectrum that is specially tailored to the needs of your plants, allowing you simple but effective all-round care.

In addition to the effectiveness of the bulbs, Hydroca also attaches great importance to user-friendliness: You can set up your LEDs quickly and easily hang them in your grow box. The larger product ranges are all dimmable, allowing you to adjust the power you use to meet the different needs of each growth stage.

With the new Hobby Rev2 series, the manufacturer has also completely switched to passive cooling, which saves you valuable electricity with the same effect.

It doesn't matter whether you're an experienced professional, an ambitious home gardener or even more reserved Are a beginner - at Hydroca you will find the right light source for your purposes.

With an effective output of 630 W, the Hydroca Pro 630 is the manufacturer's flagship. It has been specially developed for a professional and large-scale application and is therefore also suitable for use in stacking systems. In an illumination area of ​​up to 150 x 150 cm, there is space for far more than just a few plants.

The Pro 630 has a system efficiency of 2.7 µmol/J and brings a lot of power into your box!

The bulb is dimmable and allows you to individually adjust the power of the lamp in comfortable steps from cultivation to flowering.

You can find out more about the LED in our product video: 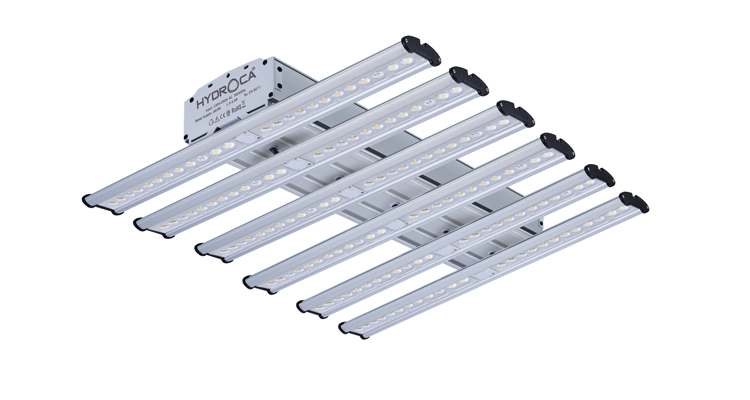 With the Ambition 320 you get a powerful LED that creates a perfect balance between professional and entry-level lamps. Not least because of the attractive price-performance ratio, the Ambition 320 Hydrocas is the most popular light source.

2.1 µmol/J system efficiency with 320 W effective output ensure that your plants are exposed to a lot of light. With a maximum illumination area of ​​120 x 120 cm, the LED can effectively supply most common grow boxes with light.

The Ambition 320 is dimmable and, like the larger Pro 630, has effective passive cooling.

You can learn more about the popular LED in our video:

To the Hydroca Ambition 320 LED

The Hobby series is suitable for everyone who is looking for a simple and safe entry into the growing hobby. With the newly released Rev2, the series was relaunched and completely revised in the course of this.

Modern Samsung 9 V LED chips emit an effective full spectrum that provides your plants with the light they need at every stage. 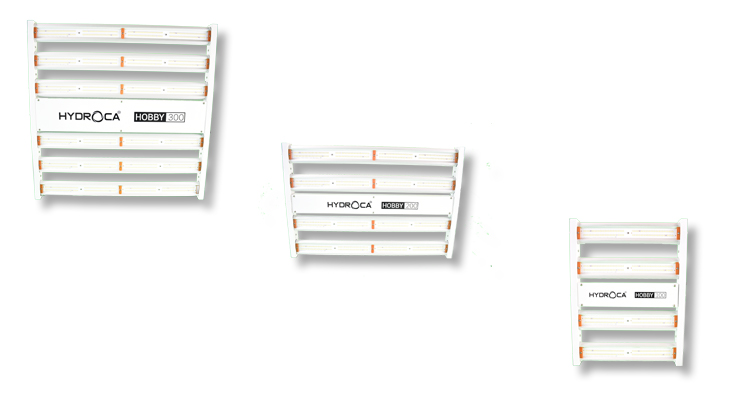 The Ambition Box - a comfortable home for your plants 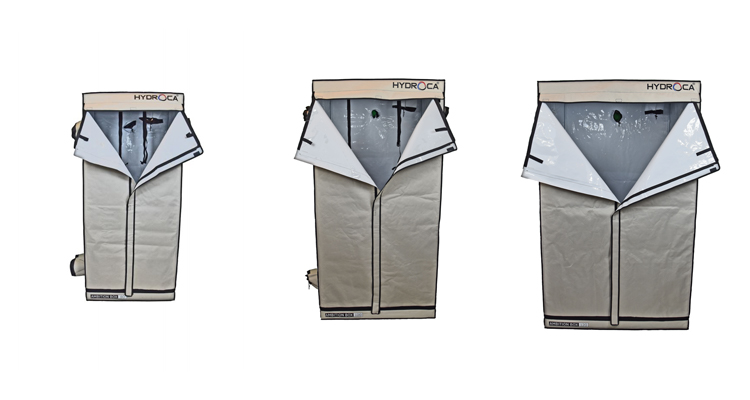 The right growing environment has a major impact on the light that ultimately reaches your plants. In order to guarantee you the best possible result, Hydroca has developed its own grow boxes for this purpose.

You can currently choose between three variants, which have the same structure and equipment, but differ in size:

Optimum reflection is the key to being able to use your light bulb to its full extent. The Ambition boxes are all covered with highly reflective Orca foil. This emits 94% of the incident light and thus ensures that the lower areas of your plants are also sufficiently illuminated.

The outer skin of the tents is robust and is characterized by the excellent closure on the front . This is easy to open, opaque and effectively protects the interior from contamination. The foldable front wings can also be secured with Velcro fasteners, which guarantees trouble-free work.

A total of four 200 mm tube sockets offer sufficient options for ventilation and power supply, while a side window gives you a quick look at the treasures inside.

You can get an insight into the Ambition Box in our product video:

To the Hydroca Ambition Box 120

Get the grow box for free as a set!

For those looking to save time and money, we have an epic offer. In our free grow box complete sets you get a complete all-round equipment, including LED, ventilation, pots and much more.

The best thing about it: the included Ambition grow boxes are included for free!

If you have any questions about the manufacturer, the products or the sets, we are always there for you. You can easily contact us.

has been added to compare.
has been removed from compare.
Continue shopping Compare