LEDs are currently the most modern lights associated with plants and, unlike other popular light sources such as sodium vapor or metal halide lamps, are not based on a gas discharge.

LEDs are light-emitting diodes that incorporate a semiconductor element that emits light when current flows through it. This emission is non-thermal in nature, which is why conventional LED lamps are characterized by very low waste heat.

However, the innovative light sources also have a whole range of other advantages, which is why many experienced hobby gardeners now swear by LEDs as a source of light. Not least, the low operating costs coupled with high luminous efficacy has convinced many customers worldwide for years.

Although modern lamps have only been available to the general public since the 1990s, the first encounters with light-emitting diodes (or the technology on which they are based) took place in the second half of the 19th century.

Much time has passed since then, during which LEDs have traveled a long road marked by several stages of development before finally finding a place among the most efficient and popular plant lamps.

Part of the credit for this development goes to NASA, which in 2012 looked more extensively at the use of light-emitting diodes in growing plants. The U.S. space agency naturally has a keen interest in an artificial, energy-efficient light source that can help grow plant food quickly and reliably. In the course of various experiments in demanding environments, not only was the high effectiveness of LED light sources underscored; it was also shown how plants react when specifically irradiated with individual light spectra. It was thus recognized that blue and red light in particular have special significance for the individual phases of a plant's life.

It did not take long for resourceful developers and entrepreneurs to make use of these findings and launch sophisticated LED plant lamps on the market. Among customers, however, the newly designed lamps met with reservations - the technology was not yet mature and the acquisition costs were too high in relation to this. Many Grower did not see any significant progress in the use of light-emitting diodes and remained loyal to the tried and tested sodium vapor lamps. Even today, there are Hobby still some gardeners who are skeptical about LEDs as plant lighting.

For the most part, however, the old prejudices have evaporated - and not without reason. Since the potential of LEDs in plant cultivation was recognized, a lot of money has been spent on research and development. The result is ultra-modern and powerful light sources that can be individually adapted to the conditions at hand. For example, the luminous efficacy of the lamps has improved considerably; a system efficiency of 2.7 µmol/y is no longer a rarity (system efficiency refers to the number of emitted photons per watt and second). The price development has also been a positive one. Although expensive LEDs are still available and the initial cost remains higher compared to NDL or MHl - the cost-benefit factor is now superior here.

Advantages over other light sources

As mentioned, LEDs have many advantages over other plant lamps. The most directly noticeable is certainly the cost factor: LEDs are incomparably more energy-efficient than other light sources at the same power, which means that the seemingly high purchase costs are quickly recouped in your wallet through the electricity savings alone.

In addition, they are consistently blessed with a high life expectancy - many LEDs can easily survive up to 50,000 operating hours without experiencing significant performance losses (this corresponds to continuous operation of more than 5 ½ years). If a diode does fail, it can be quickly replaced if necessary (here, however, we must refer to the manufacturers). Furthermore, the lamps are shock-resistant and very low-maintenance.

The low waste heat of the lamps may not be missing in this listing. If you decide for an LED, the heat development in your box will no longer be a big problem, which is why you can usually do without cost-intensive cooling systems.

However, one of the biggest advantages of lamps equipped with light-emitting diodes is another: user-friendliness. LED plant lamps can be adapted to any requirement with a wide variety of designs. Whether strip or cluster LEDs, modern ladder lamps for professional use or compact lamps for small grow boxes - you will find LEDs tailored exactly to your needs. In addition: LED lamps can be used immediately without having to rely on external aids such as ballasts.

However, not only the shape of the lamps can be individually realized; equipped with different individual diodes, LEDs can offer your plants exactly and specifically the light they need for proper growth. This is a feature that no other plant illuminant can offer so far.

In addition to highly efficient full-spectrum lamps, there are also LEDs specifically for the growth or flowering phase, as well as lamps in the infrared range. 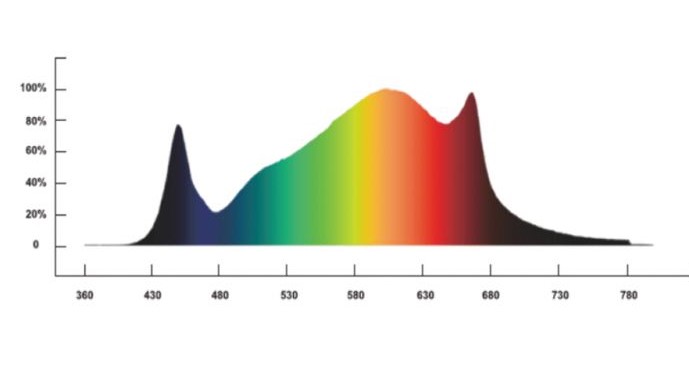 In comparison, the spectrum of a growth LED, which emits mainly blue light: 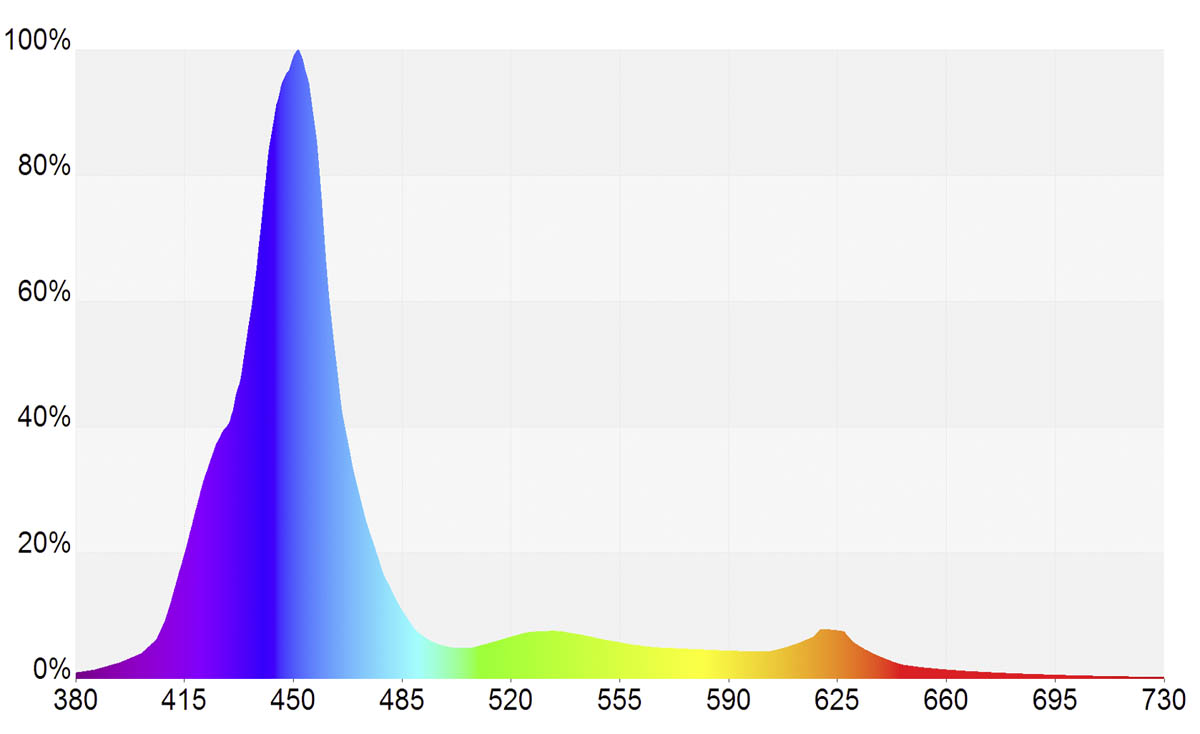 There are many experienced and reliable suppliers of LED plant lamps on the market, in Europe and worldwide. Big players worth mentioning include the market leader SANlight from Austria, but also big names like Growking and Lumatek.

But also other, currently still smaller manufacturers, such as Hydroca and Greenception have made great leaps forward in recent years and offer high-quality illuminants at a reasonable price.

In our store, we place great emphasis on the cost-benefit ratio and would therefore like to offer you primarily those lamps that offer you the greatest added value in relation to the price. So you will find not only well-known sizes, but also promising up-and-comers and LEDs for all conceivable uses in the Growing-Range. It's best if you just browse around yourself - but if you still can't find the right one, just let us know! Together we will find the best product for you

Left
has been added to compare.
has been removed from compare.
Continue shopping Compare